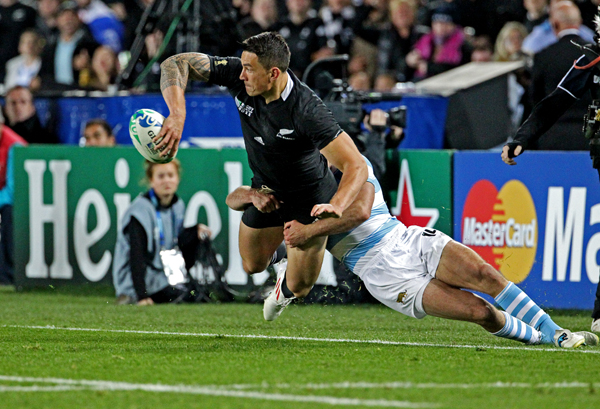 Myths can sometimes become reality when enough people repeat them without question and this is what I believe has happened with the common held belief that fancy passes or offloads, commonly referred to as 50/50’s, are the cause of teams losing games. The problem with this belief is that instead of losing games, I believe the 50/50 passes actually win games.

“Don’t throw 50/50 passes!!” Coaches and players have all heard it, some may have repeated it without question because it is coaching lore; a coaching wisdom akin to the many your parents told you growing up that you now repeat to your own children. It has been passed down over the years from the coaches that screamed it in your ears after a speculative offload that did not work; because that is how it is sometimes, you emulate the people that guided you; their beliefs become your beliefs, sometimes without you ever realizing it.

This is how myths become reality, even without factual proof, a number of coaches believe that 50/50’s lose games and thus restrict their players from doing them; period. However I am of the opinion that instead of losing games, 50/50’s actually aid victory.

“Anything, once practiced enough, can become a skill”

Anything, once practiced enough, can become a skill and once a person has become highly proficient at it, people sit back in wonderment, exasperated at the way the skill is executed with seeming ease. However without this practice the execution of the skill lacks poise, fluidity or execution and people dismiss the person as untalented or not good enough to pull it off.

This is why a player fails trying to successfully execute a 50/50 pass in a game, simply because without the necessary practice, the player lacks the skill set and decision making abilities to pull it off successfully. Coaches that limit this type of practice on their training fields and during matches are in fact limiting their attacking options, when some games call for moments of brilliance to unlock good defenses to score tries and win games.

Deciding when and how to throw an offload or a speculative pass and then to conclude in a split second that it is the best option to take at that moment, from a player that could be engaged in contact at the time, requires a certain high level of decision making ability. Training and honing this aspect is certainly not something that happens overnight, it is a difficult skill that takes years of practice over the course of a players entire career, requiring that they make many mistakes, learning from them and being encouraged to try again and again until they get it right.

“It is far easier to limit a player’s decision making on the field, than to improve it”

Unfortunately it is far easier to limit a player’s decision making on the field, than to improve it. Coaching the decision making process takes patience, loads of encouragement and questioning the player’s decisions so that they can learn from them. Players need to be put into multiple game scenarios at practice that encourage the furthering of their skill set by making decisions that may well be mistakes. Players should be encouraged to give offloads or passes they believed were correct at the time and if incorrect either the player will know about it immediately, or if not, should be guided towards the right option using questions.

Limiting players’ decision making on the field is poor coaching and the safe option in trying to win games. Modern day Rugby coaching seems to be more about the coaches’ clever playbook than the players attacking abilities. What we are creating are robotic players capable only of executing a game plan with neither the ability to question whether it is working or not, nor the ability to unlock defenses with attacking skills that even the best defenses cannot prevent.

There is no such thing as a 50/50 pass in Rugby, there are only good decisions and bad decisions, good execution or bad execution. To ensure your players improve their decision making and execution skills, try to actually coach them like you are supposed to, enable them to improve by allowing them the freedom of thought and then let them learn from their mistakes or spectacular successes. By restricting players to that of mere robots at youth level, coaches are limiting the future of the game to a dull predictable crash-bashathon.