Coaching seems to breed a sense of arrogance that many a coach may not even realise exists; an arrogance that comes about as a result of an engrained dogma of superiority whereby the person in charge believes he possesses the necessary answers or direction to help those under him succeed. This superimposed superiority hinders more than it helps, stagnates or prevents development and may destroy many a fragile dream. This is why I’m learning to shut up, listen, inspire and facilitate rather than talk, dictate and discourage.

I stumbled across a fascinating Ted Talk video a few weeks back by the founder of the Sirolli Institute, Dr Ernesto Sirolli, who advocates and implements the use of listening and then facilitating the process of building businesses by the local people for their local communities rather than the traditional and often misguided missionary ‘we know what is best’ approach whereby locals are told what they need, as determined by the foreigners. The most interesting aspect of the Sirolli Institute is that they ONLY go into an area after receiving an invitation by local residents. Acting on invitation only, listening first and then facilitating rather than telling, removes the arrogance factor of many a ‘do good’ organisation who believe that, what they know is best for the community. The Sirolli Institute shuts up and listens! 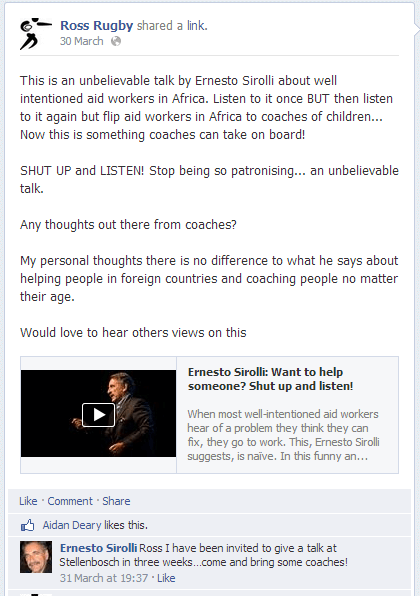 After posting the video (See below) on my Facebook page I received an intriguing message from Dr Sirolli himself informing me that he would be giving a talk at Stellenbosch University, after being invited by the Stellenbosch SRC, and then subsequently emailed me the details. I duly attended the talk on 23rd April 2014, and what really struck me was how his organisation and beliefs are so applicable to coaches.Whichever way you look at it, coaches deal with people and if you understand people and their needs, their dreams and their desires you will go further in aiding their development.

“But what is development?”

Attempting to answer the question was not an easy one for Dr Sirolli, and neither has it been easy for me as a coach. When people talk of good coaches and their ability to develop players they often refer to score sheets, cups, championships, unbeaten seasons, the way the players stick to game plans, execute moves, their style of play or skill level. But is that really development? Dr Sirolli put his definition of development down to personal growth and so do I; it can’t be measured quantifiably but without doubt it is the most important job someone working with people has.

Measuring yourself as a coach based on the personal growth of your players is only achieved by first respecting each individual without an agenda, realising that you are surrounded by people with dreams. “We are all the same, every man and woman wishes to improve themselves, to be more than they currently are, to look in the mirror and respect themselves and say I have used my talent to its full potential”.[i]

“If you don’t respect them and don’t know what their dreams are, how can you help them?”

Working with people successfully comes down to respect and with it comes the ability to actually listen to people, find out what their dreams are and then help them to achieve them, no matter how ridiculous or crazy it may seem at the time. Often people’s greatest fears are their own dreams and letting people know them, so they keep them close, often never allowing the world to hear them[ii]. This may be as a result of our culture whereby we chastise others that possess dreams which may sound crazy or different to what we expect, but if you don’t respect them and don’t know what their dreams are, how can you help them?[iii]

Only when a coach begins to realise they are a servant of helping people achieve their dreams, will they realise players are far more capable than they had ever anticipated. There is nothing more powerful for a coach than to facilitate their players’ passion as they evolve into the person and player they always wanted to be[iv].It won’t happen overnight, learning is never linear, but the growth of an individual should always be a coach’s first priority, guiding them towards their dreams of becoming the best person and player they always wanted to be trumps any idealistic visions coaches have of them winning big games and trophies.

“When you believe you are right, why do you need to ask questions?”

Coaches devoid of respect for their players will often be the ones doing all the talking, often for long periods, making all the decisions and driving the team towards their own ideals. They will be the ones who drop or move players around without consultation or even a second thought, no matter how young or old, forgetting that those players may have aspirations unknown to them. (Ever thought about that?).They arrive with an agenda viewing themselves as the font of all knowledge to the unfortunate group of players they have inherited and immediately set about pouring as much information into them, trying to improve the standards enough to play a pre-determined style of play to achieve goals the players haven’t come up with. Sound familiar?

But what if some or all players don’t fit the coaches’ beliefs, style or goals and subsequently perform poorly, quit or become disinterested? Does the coach with no respect for their players blame themselves or label the players as not tough enough, difficult, not a team player…? I can go on but there’s no need. A coach with respect for their players should have the common decency to shut up, listen and then facilitate the personal growth of each player towards their dreams.

“There’s a magic inside of each player…”

There’s a magic inside of each player waiting to be unleashed, but cannot and will not emerge under the tutelage of a coach who does not respect them enough to listen to them and their dreams. The dogma of the coach that is always right is massively misguided and arrogant. Players are not empty vessels waiting to be filled, they need guidance from coaches who can facilitate, rather than dictate, inspire big dreams, rather than discourage hidden ones. The real purpose of coaching and sport is to ensure your players emerge as the type of person and player they dreamt about.

Coaches please shut up and listen!

Although this article is based on the talk by Dr Ernesto Sirolli as is the title, Dr Sirolli has had no input in this article nor has he granted permission. Some quotes have been used from Dr Ernesto Sirollis’ talk in Stellenbosch, however as is common with articles written and people talking about it afterwards some elements have changed to how I perceived the messages. Some of the quotes have been altered to fit the article, but the source of the words come from Dr Sirolli. This article is in no way associated with the Sirolli Institute, it is rather intended to spread the Sirolli message as I interpreted it, to coaches whom I believe would benefit from hearing it. Please visit the Sirolli Institute website: www.sirolli.com for more information about its programmes.